Welcome to FINN JONES ONLINE @ finnjones.org a website dedicated to British-born actor Finn Jones. Most known for his roles as Danny Rand and IRON FIST in the Marvel/Netflix shows IRON FIST and The Defenders, and as Ser Loras Tyrell in the HBO series GAME OF THRONES, Finn is currently being seen in the AppleTV series DICKENSON as Samuel Bowles. Finn has a few films to his name including LEATHERFACE, SLEEPING BEAUTY, THE LAST SHOWING. If you're a fan of Finn's please feel free to join us here to celebrate his acting career. Candid photos will not be posted to protect Finn's privacy. To read what will or won't be posted, feel free to read this site's Candids policy.

Another article added to the gallery and the press section. Here Finn and Jessica Henwick (Colleen Wing) talk about how difficult it was to train for the stunts on IRON FIST. Henwick also points out how she trained for her role on GAME OF THRONES for her role as Nymeria Sand, one of the Martell Sand Snakes. A funny thing for Finn was that he was mostly shirtless in his fight scenes due to the tattoo on his chest. It’s what he says about the burgers that’s so funny. Once again, the scans will be in the gallery linked in the section below, with the text available by clicking on this . 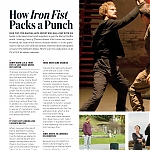 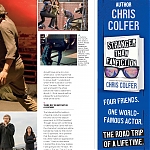 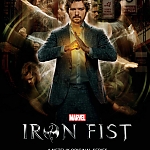 The press for IRON FIST continues. Here Finn and the team of IRON FIST discuss the series and how it will set things up forTHE DEFENDERS. The actual text of the article can be found below denoted by this symbol . 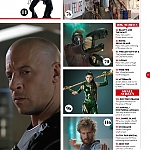 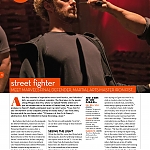 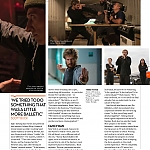 Finn answered some questions from Facebook. Here are some of his answers.

I found a video from back in December where Finn talks about his first American Thanksgiving, plus who he’d like to see on the Iron Throne. Unfortunately, it won’t be Loras. As we all know the entire Tyrell family save Lady Olenna (Diana Rigg) were blown up in the Sept thanks to Cersei (Lena Headey). In a funny bit Finn plays a round of “Fuck/Marry/Kill” and his answers are pretty funny. He also brought us up-to-date on what he was working on, which of course we know was IRON FIST and THE DEFENDERS.

Two new articles for the press section. Both are on Finn and IRON FIST and the upcoming THE DEFENDERS, plus some bits of DAREDEVIL starring Charlie Cox as Matt Murdock, and Jon Bernthal as Frank Castle also known as The Punisher. Here both Finn and Jessica Henwick (Colleen Wing) talk about the show, plus some information on Finn’s part in THE DEFENDERS. It’s less than two weeks now and I can hardly wait to see Finn in this. I’ve added the scans to the gallery and the transcribed text article to the press section. To read the article please click on the icon at the end of the article title. You can click on the [000] for the link to the gallery scans.

Finn was seen in the streets of New York City with fellow IRON FIST / THE DEFENDERS co-star Jessica Henwick (Collen Wing). Colleen also plays the part of Nymeria Sand on GAME OF THRONES with Finn of course as SER LORAS TYRELL. I can hardly wait for any on-set images of the entire cast in Charlie Cox (Matt Murdock / Daredevil), Mike Colter (Luke Cage) and Krysten Ritter (Jessica Jones). I’m keeping the vigil.

Sadly this is the last of Finn’s work as Ser Loras Tyrell in GAME OF THRONES. As we all know Loras, Margaery (Natalie Dormer), Mace Tyrell (Roger Ashton-Griffiths), Kevan Lannister (Ian Gelder), the High Sparrow (Jonathan Pryce), Lancel Lannister (Eugene Simon), a good portion of King’s Landing, as well as the Sept itself were pretty much reduced to Jello by Cersei Lannister (Lena Headey) and her pyromancer/maester Qyburn (Anton Lesser). However, fear not. What was HBO’s loss is now Marvel’s gain. As we all know Finn was selected to star in the Netflix superhero series IRON FIST as Danny Rand. IRON FIST drops on 17 March, 2017 all in one go. Later in the year Finn will return to the role in THE DEFENDERS alongside Charlie Cox as Matt Murdock/Daredevil, Kristyn Ritter as Jessica Jones, and Mike Colter as Luke Cage. So good times ahead. As with the previous posts if there are any extras on the GAME OF THRONES blurays I’ve forgotten, please let me know in the comments section.

Bohemian :: Finn Jones Online is a gossip and candids free zone. This site also does NOT post pictures of Finn in his private life, nor any photos of him in what should be considered his family time. We are a 100% paparazzi free zone. We will not post information that would be considered as rumours, or speculate on his life. Please respect Finn’s wish for privacy. For information on what is considered post-worthy, please read this site’s CANDIDS POLICY.

FINN JONES ONLINE @ finnjones.org is a website dedicated to the work of British actor Finn Jones. I am in no way affiliated with his person, his management, nor his family. All content, except otherwise noted, is copyrighted to their original owners and no infringement is intended and no rights implied. Content contained within are subject to fair use and used here either in whole or in part as a commentary on the work and career of Finn Jones.

Donations are only to pay for webhosting and for renewals of domains not for purchasing of materials to put on this site or to ask for money to offer copyrighted material for the reason of monetary gain to the webmaster.